A downloadable game for Windows and macOS

"There has never been a sadness that can't be cured by breakfast food."
- Ron Swanson, Parks and Recreation

Runs for 15-20 minutes.
Comfort Food is an isolated story made for Friendship Jam 2019.

The GDWC279 days ago

This was such a wholesome game! I enjoyed the black and white art style and the story is very relatable. The characters are very lovable and it just felt like they both got to breathe out as they met at the coffee house, even though it was awkward at first it turned out fine in the end :D

I don't know if you've heard of Game Development World Championship before (gdwc2019) but it's a competition for indie game developers where they can submit their games and it's free! It's great if you want some more visibility for the game and it only takes a couple of minutes to join :)

this is so cute and really captures the awkward feeling of meeting up with somebody you've lost touch with.  i love the idea of food bringing people together!

aah thank you! it's based lightly on my own experience of reconnecting over a snack/tea but with highly condensed dialogue for the sake of time, haha. however I had a lot of fun with the jam theme & thank you  and cloverfirefly for hosting! 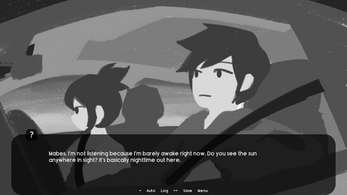 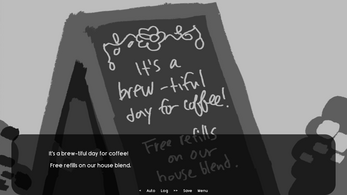 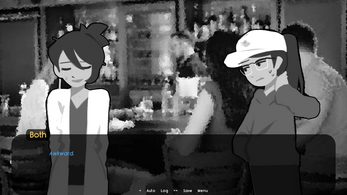